Sample | eBook | Paperback
Illustration © Tom Edwards
It was supposed to be a simple – if hugely lucrative – job.
Captain Michael Dannage and the crew of the Hope’s Folly can’t pass up the opportunity to salvage a fleet of warships from the long dead Terran Imperium. Things never go right for Dannage, but he never expected them to get this out of hand.
The Terran ships aren’t as derelict as everyone thought and the malicious force that destroyed the Terrans thousands of years ago is still alive and still bent on humanity’s annihilation.
As an ancient evil rises, it could mean the end for all Dannage holds dear, and he’ll do whatever it takes to save the people he cares about.
As enemies – both ancient and modern clash – it will take all Dannage’s skills and more than a little luck to survive.
They say ‘hope is not a strategy’, but it’s all Dannage has left.

"Slave Mind for me was thrilling, captivating, and addictive right from the start" -Aimee Ann (Red Headed Book Lover)

The prequel story First Impressions is now available for free. 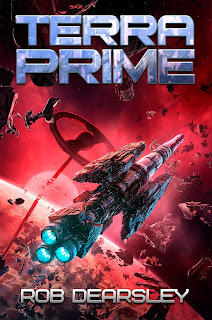 It’s been a year since the sentient, Terran ship ripped through colonised space and humanity is rebuilding. But Dannage is suffering the after effects of his linking with the Terran ships.
It started as dreams, whispers in the dark. But now, the voices are intruding into his waking thoughts. With the Terran ships clawing at his sanity, Dannage is desperate for a cure.
The search for a cure throws Dannage, Arland and the crew of the Hope’s Folly into the middle the political machinations of a secessionist government, the clutches of black market scientists, and finally, onto a perilous mission to the heart of the ancient Terran Imperium, to Terra Prime.


But Terra Prime holds secrets much older and darker than any of them could imagine. Some things were never meant to exist in our reality.

Stuck inside? Bookstores and libraries closed? Why not check out these great e-books from indie authors. Links are to author pages. Listed are standalones or the first books in some awesome series. Go ahead and take look. What else are you doing with your time? Fantasy: “Blood of the Eohim” by J. Fries. www.amazon.com/J.-Fries/e/B07DL9JJ55 “Islands of Loar: Sundered” by Ernie Laurence Jr. www.amazon.com/Ernie-Laurence-Jr/e/B007OYNT3K “The Goblets Immortal” (Fiction Without Frontiers) by Beth Overmyer www.amazon.com/Beth-Overmyer/e/B00KGSTVZG “The Rune that Binds” by Jonathan Goff www.amazon.com/Jonathan-Goff/e/B004YRB82O “Thorn of the Night Blossoms” by JC Kang www.amazon.com/JC-Kang/e/B0195EMIY2 Urban Fantasy: “Confessions of Innocence” (Innocence Cooper Series Book 1) by L.S. May “The Reaper’s Heart” (The Reaper's Heart Series Book 1) also by L.S. May (Books 2 and 3 are perfect Covid-19 books) www.amazon.com/L-S-May/e/B013MHQ3PI “Divine Fraud”
Read more