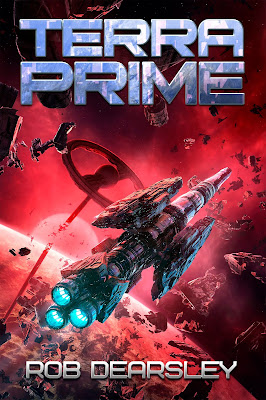 Thanks to the fantastic work of Tom Edwards Terra Prime (Book 2 of The Terran Legacy) now has a cover.

Captain Michael Dannage is losing his mind. Or more accurately, it’s being stolen.
It started as dreams, whispers in the dark. But now, the voices are intruding into his waking thoughts. It’s been a year since the Terran Imperium’s sentient warships ripped through colonised space. During the final battle, Dannage had to link with the ships – and now they won't let him go.
With the Terran ships clawing at his sanity, Dannage is desperate for a cure.
The search throws Dannage, Arland and the crew of the Hope’s Folly into the political machinations of a secessionist government, the clutches of black-market scientists, and finally, onto a perilous mission to the heart of the ancient Terran Imperium, to Terra Prime.
But Terra Prime holds secrets older and darker than any of them could imagine. Some things were never meant to exist in our reality.

Terra Prime will be available summer 2020.

SPOILER  WARNING FOR GAME OF THRONES S08E05 Like a lot of people I’ve been into a Game of Thrones for the last five years or so (yes I was late to the party). And, like lots of people online, I’ve found parts of the final series to be somewhat lacking. One of the scenes that I’d like to look at in more detail is the long-awaited Clegane-v-Clegane smack-down. That final epic fight between the huge brothers. Or Cleganebowl as the internet has dubbed it. Straight up, the fight itself was a visual masterpiece and really well choreographed. It was great spectacle, and I’d even go so far as to say it has a really interesting mini-ark, with rise, fall and “darkest moment”. But as part of the broader narrative, I found it lacking in stakes. People (or readers) want character motivations, and given Thrones has been a largely character driven it’s expected that character motivations should be the driving force behind something this “big”.   When it comes to character motivation
Read more